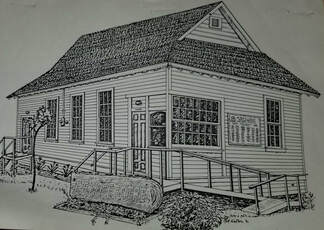 Incorporation 1984
The Fraser Information Society formally incorporates under the British Columbia Societies Act on October 22, 1984. It becomes a Registered Charity under federal legislation on August 19, 1988. It changes its name to the CEED Centre Society on January 20, 2006.

Its first proclamation as a charitable organization reads:
Why the Fraser Information Society Is Created

The Fraser Information Society grows out of conversations around the kitchen table--conversations about the growing need for education to meet the challenges we face, and the practical and spiritual dimensions of the changes ahead.

The Society is founded on the premise that no one of us has all the answers, but together we have the power to find effective solutions. Government, industry, special-interest groups and individuals need to step beyond the adversarial approach to problems. The Society’s mandate is to encourage problem solving through education based on balanced research and cooperation. 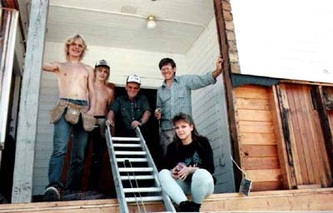 Don Mallais (right, back) and volunteers closing in the front veranda. 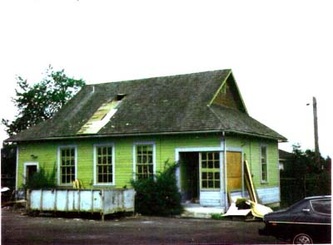 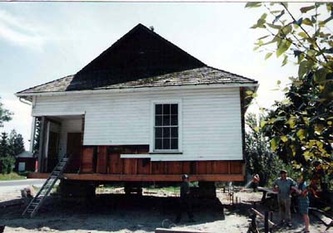 The Society takes possession of the Old Japanese Schoolhouse in 1989, moving it from 232nd and Dewdney Trunk Road to save the heritage building from demolition. A youth crew is hired and trained to help restore the building in its new location. The building is thought to have been built sometime between 1920 and 1936, but there is no definitive record in the local archives. The building was originally built behind the Haney Nokai building at the intersection of the streets now known as Dewdney Trunk Road and 232 Street. 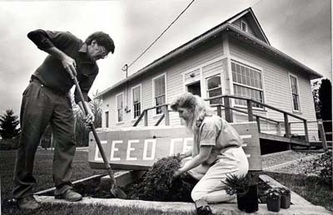 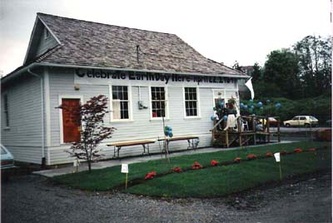 BBS Service 1990
A computer bulletin board service (Internet precursor) is launched to link to the North American environmental community via ECONET and UBITNET. At the time of publishing, over 50 subscribers are registered. By Issue 2, the number rises to 160.

Desktop Publishing Service (The Green Desk) 1990
Desktop publishing, a relatively new concept, is launched as a service for the non-profit sector. 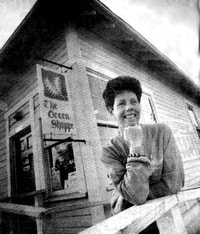 CEED Store 1990
Environmentally friendly goods are the focus of a small retail outlet in the CEED Centre. A brainchild of Lou-Anne Bryant, the store focuses on recycled stationery and books and goods from environmental organizations or small publishers.

Celebrating Earth Day Since 1990
First held at the CEED Centre, the Society switches venues for the celebration of Earth Day to the downtown Memorial Peace Park in 2004. Other organizations join in presenting the spring festival and begin to coordinate with the Haney Farmers Market. Live concerts, dance performances and puppet shows attract thousands of spectators.
Photos from Earth Day 1993 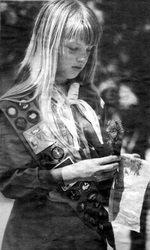 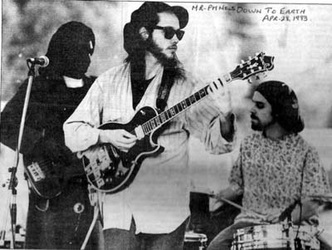 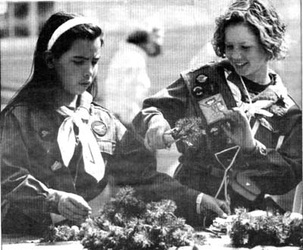 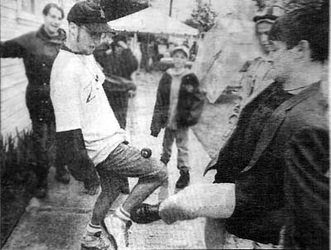 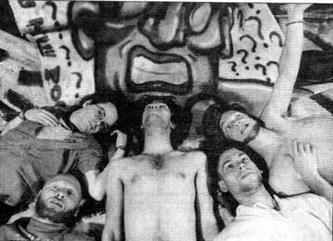 Community Forum Broadcasts 1990s
FIS begins broadcasting programs over Cable 4 on topical issues in the 1980s and early 1990s. One show focuses on how to recycle. 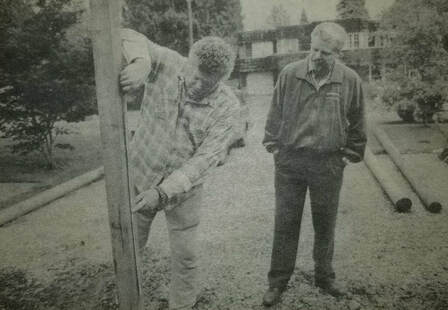 Coordinator Ted Woolridge and Society director Craig Speirs work on the organic garden project. Photo: Karin Mark, MetroValley News 1998
Port Haney Compost Education Garden (1995)
Now called the CEED Centre Organic Community Garden, the garden is created by a team of volunteers led by Ted Wooldridge. Lumber and supplies for the garden are donated by local businesses. People without gardens at home can enjoy the benefits of working with nature.
​ 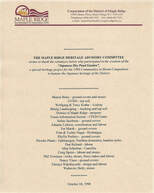 Japanese Dry Pond Garden (1998)
Volunteers and local businesses undertake a special heritage project for the 1998 Communities in Bloom competition to honour the Japanese heritage of Maple Ridge, creating a Japanese Dry Pond Garden in front of the CEED Centre. Tatsuya Wakabayashi is credited with the design, and plants and materials are donated by a long list of contributors. 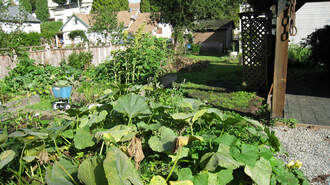 Port Haney Urban Organic Project (1998)
Now called the CEED Centre Organic Community Garden
​
The plan is to have a continuous flow of people in the garden, showing how it’s possible to have a low-cost, small, urban organic garden. It is to be used to hold volunteer-taught gardening and landscaping workshops and other activities in the summer. It is also envisioned for participants to sell their produce on certain days that a market would be held. It is some place that community members can come to learn and get their hands dirty if they want.

​The bulk of the site groundwork takes place between October 1 and November 12, performed by Society volunteers and the Access Employment Service’s MENTEX program. Supplies are donated by Haney Home Hardware, Camano Lumber, Haney Builders’ Supply, Vancity, Bell Pole and Topline PreCast.  The grand opening is April 25, 1998.
Community Access Program (2003)
The Society becomes the network coordinator for 7 community access sites in Maple Ridge, which make information technology available to the general public and offer basic Internet and computer skills. Over time, the public library sites switch to a different category and are removed from the network. The 5 remaining sites are the CEED Centre, the Maple Ridge Leisure Centre (later moved to Greg Moore Youth Centre), the Family Education and Support Centre (later moved to the Women's Centre and Katzie First Nation Band Office), and the Ridge Meadows Seniors' Centres in Maple Ridge and Pitt Meadows. The program wraps up in 2012. The CEED Centre continues to offer the services at its site as the Community Computer program.

Campaign for Pesticide Reduction! Maple Ridge (CPR!MR) 2003
An ad-hoc group of citizens with first-hand experience of the dangers of pesticides joins the CEED Centre to advocate for changes in pesticide use and regulation in the Districts of Maple Ridge and Pitt Meadows.

New Executive Director (August 2004)
Christian Cowley joins the Society as its new facilitator, replacing Michael Trawick. His title later changes to executive director.
Website Launch 2005
We launch our first website along with the CPR!MR subsite (www.cprmr.org) compiled by directors Maria Raynolds, John Early and Sheila Pratt, and staff member Christian Cowley.
Name Change 2006
On January 20, 2006, the Fraser Information Society officially becomes the CEED Centre Society. The name changes to boost community recognition of the centre and the society behind it. The Port Haney Urban Organic Garden is also renamed to the CEED Centre Organic Community Garden.
Pesticide Alternatives Education Program 2006
Maple Ridge enacts a Pesticide Control Bylaw in December after many years of advocacy by CPR!MR. The CEED Centre eventually rebrands the educational campaign and website as CanadaGrowSmart. It raises awareness of alternatives.

Pioneer Park Community Garden (1998-2000, 2008)
The CEED Centre works with the District of Maple Ridge to create a community garden in Pioneer Park, adjacent to a seniors complex by the same name. In May 2008, Meadowridge School students rebuild the garden, paint the shed and build 42 rose trellis frames for the fence. The community embraces the improvements and it has a perennial waiting list.

Glenwood School Neighbourhood Garden (April 2007)
CEED Centre staff work with volunteers and students to build a 6,000 square-foot garden on school grounds to serve as a living classroom. The garden is designed by Christian Cowley. Katzie First Nation contributes yellow cedar for the welcoming arch and perimeter fence and performs a blessing ceremony.
Official Heritage Status Conferred (2007)
The Centre building, known as the Old Japanese Schoolhouse in the city heritage inventory, is formally registered as a heritage building with the Federal
Government. ​ 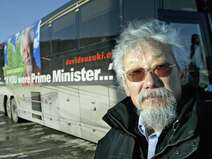 Photo credit: Chris Mikula / Postmedia News
Local Host of the "If I Were Prime Minister Tour (2007)
The D. Suzuki Foundation crosses the nation with its "If I were Prime Minister" tour raising awareness of pressing environmental issues. David Suzuki speaks at each stop. The CEED Centre Society serves as the tour's local host in Maple Ridge and makes the arrangements for the sold-out event at the ACT Theatre.
​

Climate Change Solutions Forum (March 23, 2009) and birth of GETI
The Society hosts a climate change solutions forum with a panel of experts. The transition town model is proposed as a potential framework for solutions to the climate change and peak oil issues. Subsequently, the Golden Ears Transition Initiative (GETI) is created as a transition town movement for Maple Ridge and Pitt Meadows.  Gerry Pinel and Christian Cowley create a strategic plan to make the community more resilient to climate change and a changing energy landscape.

Volunteers clearing invasives at Aldridge Acres School Farm
Aldridge Acres School Farm (Nov 2009)
The family of Maureen Aldridge offers the use of its home property for a school farm complete with chicken coop. The Society partners with School District 42 and its Connex Program to create a living farm classroom. The Metro Vancouver Agricultural Advisory Committee contributes a grant to help establish the farm. The farm is used for three years until the passing of Maureen. ​
Weekly Community Discussions (Jan 2010)
After issues arise in the neighbourhood with the increasing visibility of homelessness, addiction and substance misuse and prostitution, the Board extends its Tuesday evening meeting to the next day to find ways to contribute toward solutions, inviting additional community members and officials for input. The meeting turns into a weekly drop-in forum known as the Wednesday Community Discussion.  ​After a few years, Gerry Pinel becomes the facilitator.
​

Sue and Gerry
Seniors Activity Group (2015), Seniors Inclusion Program (2017) and Seniors Volunteer Inclusion Program (2019)
Susan and Gerry Kennedy come to the Centre looking for a volunteer opportunities a day after the Society receives notice of award of a New Horizons for Seniors grant to keep seniors active and the original proponent of activities is no longer available. Sue agrees to lead a group for persons with dementia and their caregivers. Many years later, Sue continues to attend the group with others like her whose spouses go into care homes or pass away. The group provides a space for both patients and caregivers to relax and socialize without stigma. The Seniors Inclusion Program follows to include more seniors in activities that range from horseback riding and fishing to bowling, pub lunches and visits to the lakeshore. The seniors also participate in expeditions with youth programs. The seniors decide that SAGE is a better acronym than SAG, so it becomes the Seniors Activity Group Eh! In mid-2019, after its third round of funding as the Seniors Volunteer Inclusion Program, the group adopts the KEEN Agers as its new moniker.

Award for Inclusiveness (June 2019)
The Municipal Advisory Committee on Accessibility and Inclusiveness (MACAI) recognizes the SAGE program with an award for its inclusiveness. The Society is nominated by Seniors Network facilitator, Heather Trelevan, who sees the SAGES making a difference in the community. The Society in turn recognizes the amazing work of Heather and her impact on the community. 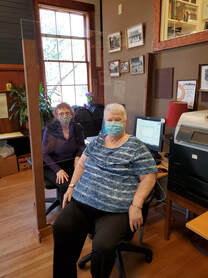 Seniors Tech Buddies Program (Nov 2020)
The COVID-19 pandemic strikes worldwide and measures to prevent its spread shut down many of the social activities normally pursued by seniors. Many become socially isolated and begin to show signs of deteriorating mental health. To comply with the emergency provisions, the CEED Centre Neighbourhood House closes to the public completely over April and May 2020, resuming weekly seniors programing in June 2020 only outdoors in the garden pavilion. In November, we begin teaching seniors how to use video conferencing platforms like Zoom to meet socially and to stay in touch with family. We partner with the Maple Ridge Pitt Meadows Katzie Seniors Network to set up the Seniors Tech Buddies (also called the Seniors Tech Peers) program to train more seniors. The STB draws on a senior to team up with a youth to offer training at the appropriate speed and level of iteration to seniors unfamiliar with smart phones, tablets and computers. By December 2021, more than 56 seniors receive training. Some borrow laptops and tablets for up to a year and others receive free upgrades to their existing equipment to make them serviceable.
A Note to Readers
Anyone with corrections or more historical information (dates, people) or images is encouraged to contact the Executive Director to honour the efforts of our community builders.
UA-107563947-1